In the heart of the Prekmurje region, where Slovenia, Croatia, Austria and Hungary are so close to each other, the city of Murska Sobota invites you to visit. For the attitude to bicycle support the city has ranked on the 2nd place in the Best cycling municipality award in Slovenia for 2013. In the explanation, the evaluators stated that “… has been a lot done on the strategic planning of cycling and participation in EU projects, what shows in better cycling infrastructure and better services for cyclists … “.

Wide network of cycle paths are there not only for the tourists but more important for the locals. They are using it more and more often as a very comfortable and pleasant way of moving around the city, going shopping or for commuting. As a city on a plane, there are perfect conditions for cycling. It helps a lot, that Murska Sobota is a place with more than 2.000 hours of sunshine annually.

Bicycle infrastructure is not only cycling paths. 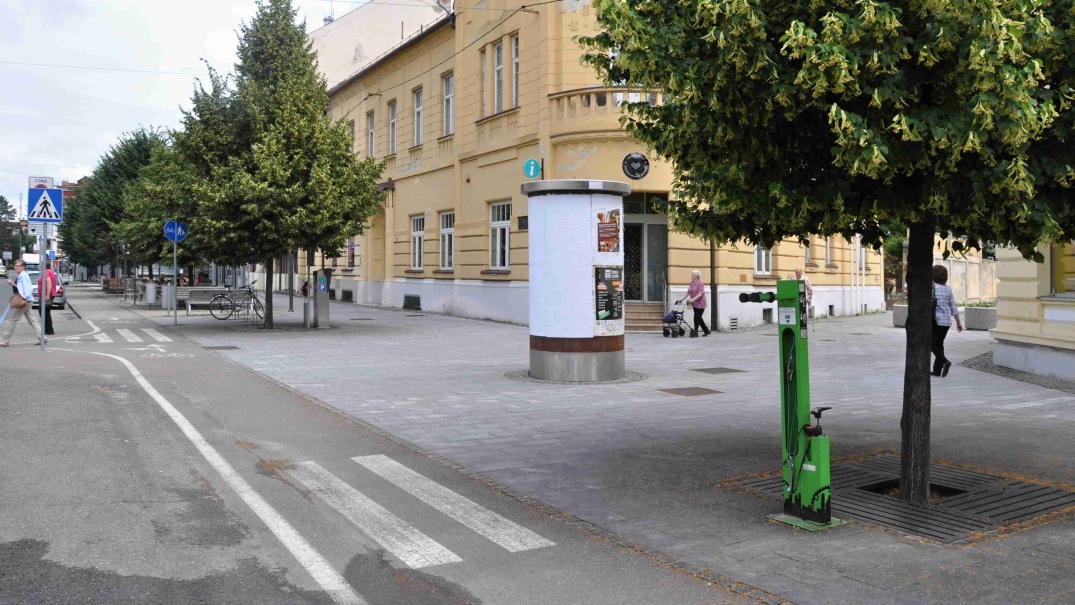 It includes MANTIS self-service bicycle repair stands in the city centre allowing people to pump their tires or use the tools for unexpected basic repairs. The town hall has launched a bike sharing scheme that offers free of charge (https://soboskibiciklin.si/). The system consists of two stations and connects the city centre with suburban shopping centre. In the villages around Murska Sobota (all connected with the city with cycling path) there are rest stops for the cyclists.

According to the mayor Mr. Aleksander Jevsek, the support of cycling remains the town hall’s priority. Future infrastructure projects are focused on building the cycling paths also between the villages, upgrading the existing paths by adding the complementary cycle infrastructure such as bicycle repair stands and rest stops for cyclists. More bike sharing stations are in the plan too. Attention will be focused also on a communication with residents, institutions or private sector with the aim to fully support every day bicycle usage as a preferred means of transport for going to the school, shopping or commuting.

« Customized MANTIS stands Add an eBike to your holiday »