Not a long time ago, people used to buy mountain bikes without taking into account if they planned to ride on asphalt, in the city, shopping or commuting to work. How does it look like today?

It is obvious that a lot of people understand already that if they want to transport themselves by bicycles, or do sport cycling or do just leisure cycling while admiring the nature, it is convenient to have the appropriate bicycle for each purpose. The mountain bike really served as a universal mode of transport in the past. It was often a cheaper choice due to the lack of accessories that would bring the owner a value added but at the same time a higher price. But it was not always just about the price. It was a result of the era where a bicycle was considered as cheap mode of transport. Mountain bikes were something like nylon jogging suite, a kind of a symbol of the age connected with an aesthetic deficit. A bicycle becomes an important topic nowadays. Not only like a modern transportation alternative but also as a part of an active free time use. It has been understood that for each purpose it is convenient to have an adequate bicycle. Nowadays, it is possible to meet people that have more bicycles and use them exactly to the purpose they were designed for. The more a man cycles, the more he finds out how important is to have the proper bicycle. Modern technologies allow cycling in the most diverse conditions and also bring opportunities for older people that often quit even thinking about cycling.

Are there any significant differences in the customers’ preferences in Slovakia and other countries?

The most important difference is contingent on transport infrastructure. There are countries where the vast majority of bicycles have been used as a mode of transport. You need only think of Netherlands, Germany or Denmark. In the country like Austria, the bicycle is mainly a sports tool. But it is important to remember that it is contingent on the overall people attitude to the sport. Actually every country has its own bicycle culture that is somehow specific. Mountain bikes are still the number one in our country. They were being chased by so called cross bicycles, what was similar in Czech Republic too. Nowadays, the cross bicycles that were considered as universal bicycles for road as well as easy terrain are losing the position and the segment of specific mountain bikes like the 29ers is gaining preferences. The demand for typical city bikes is rising. Nevertheless the conditions in our country are not yet comparable to more developed countries, leaning towards trends is recognizable. They signify moving the demand to very active and conscious bicycle use and that the bicycle becomes more the mode of transport.

Dema has supported “The street for everybody” project, you became the main partner of the national “Commuting to work on a bicycle” contest this year. Is it related to the above mentioned boom of using bicycles as a mode of transport?

Yes, it is natural that we search inspiration for our further development in the expectations of our customers. And as we don’t want just to wait, we welcomed the opportunity to actively contribute to the forming of public approach to bicycle transportation. I perceive it personally as a topic exceeding to other common themes too. If we want to be surrounded by an environment that provides sufficient cycling opportunities, we have to help convincing the competent bodies about it, the ones that make decisions about urban projects. And how else, than with a mass of people that like cycling and perceive cycling as a part of their everyday lives, is it possible to do it more effectively? 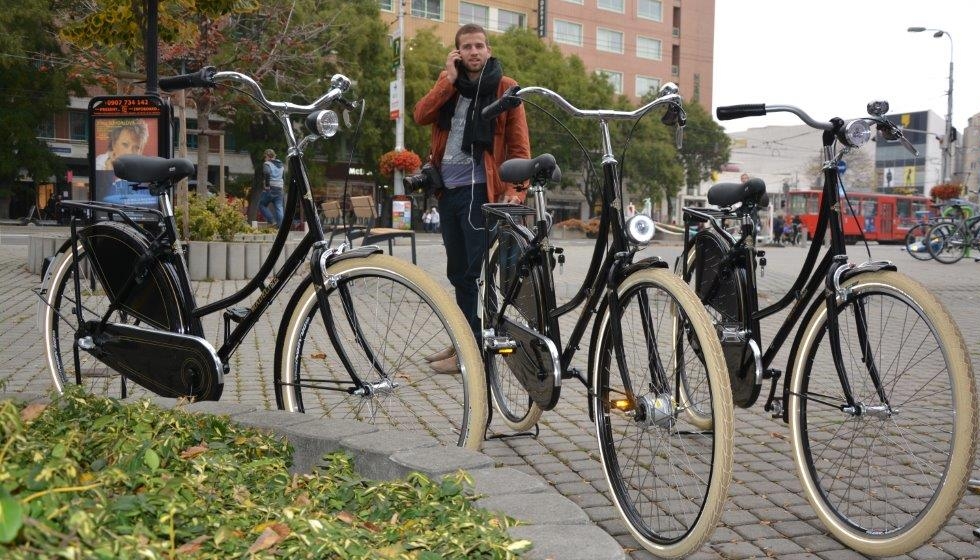 The cycle infrastructure and bicycle transportation development is particularly the competence of local governments. But the first public bicycle repair stand in Senica appeared in front of your factory store.

Unfortunately, it often happens that the ones, who should care the most about how the cities look like, are many times clueless or neglecting the opportunities. For example for the city of Senica with very unhappy urban solutions and with traffic that collapses every morning and every afternoon, a targeted bicycle transportation strategy is an ideal solution. Senica is a small city, you can cross it on a bicycle literally within few minutes. There are unfortunately no cycle paths built over here, not even to newly constructed industrial areas, where there was a possibility to implement it into the projects. Our service stand is just a small contribution to the local community. I am convinced that the city could provide the people with more such stands and they would be surely used a lot. For example in the schools, housing developments, business centers or in front of the newly reconstructed swimming pool. Bigger employers in the city could follow this example too. Especially in the schools I see the huge opportunity how to lead kids to cycling but also to the responsibility as well as bicycle maintenance skills. 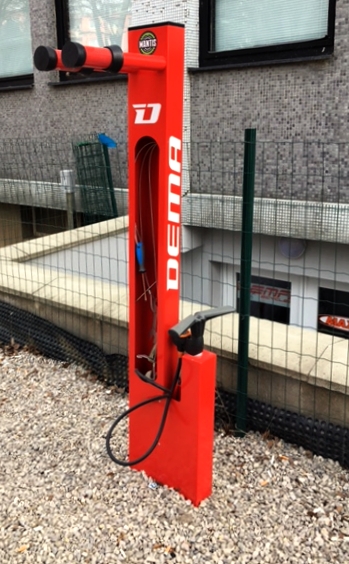 People can use your service stand free of charge. Can it take away customers that need bicycle service from your shop?

We are not afraid of this. It is intended for the basic service, something like the first aid. Bicycles become still more and more sophisticated. Service centers will focus exactly on the operations that the customers will not be able to do themselves.

What do you think about a bit controversy topic allowing the cyclists to enter pedestrian zones or riding on the sidewalks?

The topic is controversy only when there is a misunderstanding among the stakeholders. Cycling is an ecological mode of transport that doesn’t harm the environment with noise and emissions. What is the difference between a runner with headset listening to music and a respectful cyclist? The respectful cyclist is definitely less dangerous for its surroundings. If we allow cyclists to enter the pedestrian zones, we will make their transport faster, we will reduce the load on other roads. But firstly it is about rules and respectfulness. Where there are possibilities to separate the cycle lanes there are no problems. It is not possible to generalize but I think that in general it is most important to apply the common sense. There are lots of examples abroad that it is possible. It is not necessary to make up anything new, just let us inspire. 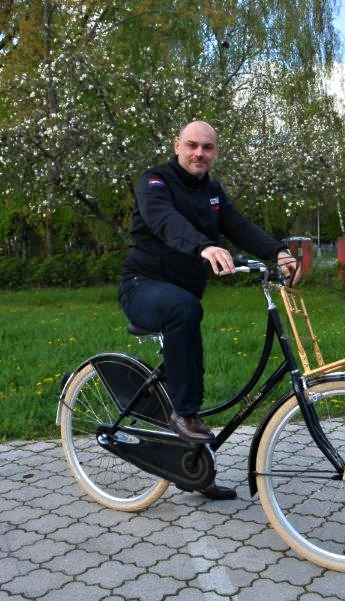 What is your opinion about the prestige resp. social status of cycling?

This is a quite opened question. Not a long time ago who didn’t own a car over here was as if socially inferior. Young people don’t desire buying cars nowadays. They are searching for other values. A car becomes still less and less a status symbol. Bicycles played a significant social role in the past. Massive bicycle rise allowed the equalization of people of various social classes, it has even significantly contributed to women equalization. It is a fascinating story of an invention that in its simplicity hasn’t been yet overcome. A bicycle contributed to the labor force mobility and has even become an important part of the development of many regions. It has many other roles nowadays. Especially when it is a sports tool it becomes literally a cult for its owners. As in anything similar, it is possible to see some unhealthy behavior here too. But it is always about the personal preferences. The most substantial is the fact that nowadays a bicycle connects people much more than it separates them. We are more respectful on the roads as well as in the nature. It becomes still more and more a modern transportation alternative and a life style expression.

Do the e-bikes play a positive role in this way?

E-bikes are a significant milestone. They bring new solutions, possibilities and opportunities. From the customers’ point of view, in the Slovak conditions, it is hard to perceive yet what the e-bikes mean already. They come in an era, when they naturally become an integral part of urban solutions, they create possibilities and motivate to move actively a wider range of people while generating a demand for various services for example in the tourism. The newest technological solutions are being applied to these bicycles and they become interesting also for car producers already, because the e-mobility is a trend that has to be solved in strategy decisions of everybody who is involved in mobility. All of this brings material and innovation availability that were not thinkable for use in bicycle sector some time ago. Continual e-bike price reduction comes along with it and makes the e-bikes more affordable for still wider range of customer even in our conditions. I suppose that we will skip the phase of creating favorable conditions for classic bicycles and we will intensively solve conditions for the use of e-bikes. It is important to remember that a responsible user is needed for this. Here I see a possible problem, but the chances I see in solutions that will allow everyday use of bicycles and e-bikes.